Flatulence means that there is too much air in the bowels. The body can get rid of these excessive gases in various ways.
Read more about who is affected, possible diagnoses and treatment here.

Meteorism (meteoros means ‘floating in the air’ in Greek) refers to a state when the abdomen is bloated and distended.

In the case of flatulence, too much gas from the bowels is emitted via the rectum. In most cases this wind is harmless and only temporary. This can be caused by eating the wrong things, eating too quickly and stress, but also by food intolerances.

Which symptoms occur with flatulence?

Depending on the cause, flatulence can be accompanied by other symptoms: 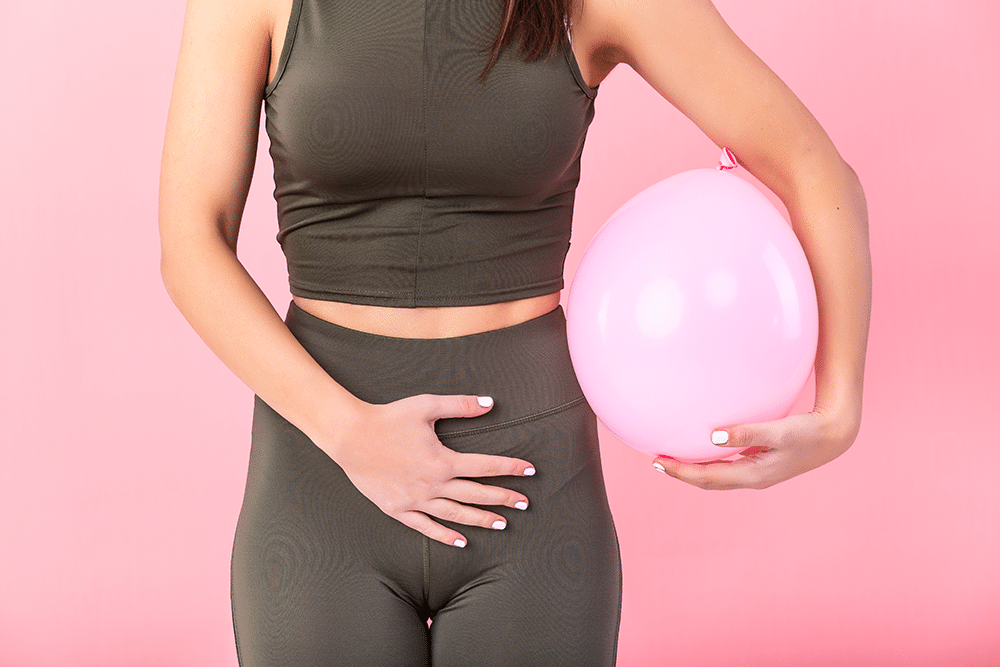 What can cause flatulence?

Wind arises due to an imbalance in the natural gut flora (which is now often referred to as the intestinal microbiome). In this case, increased numbers of gas-forming gut bacteria settle the bowels. The most common causes include eating the wrong foods and in the wrong way – eating too quickly leads to more air being swallowed, which then enters the digestive tract.

Most of the air in the bowel is, however, formed by the intestines themselves, i.e. by the bacteria there during the metabolic process. This process is intensified by certain foods (e.g. foods high in dietary fibre such as savoy cabbage, cabbage, legumes and onions). Very rich, greasy or sweet foods as well as the excessive consumption of alcohol and coffee can also lead to flatulence. Artificial sweeteners, which are used in many ‘diet’, ‘light’ and sugar-free products (e.g. sorbitol and xylitol) also create wind.

Flatulence is also a typical symptom of irritable bowel syndrome. Mental factors such as stress or anxiety, hormones (e.g. in pregnancy or at the start of menstruation) can also promote gas formation in the bowels. In addition, various illnesses can be accompanied by flatulence.

Finding out causes of flatulence

What are the symptoms of 3-month colic and how do these painful episodes differ from normal crying episodes?
Furthermore: What can I do to help my baby?

How can flatulence be diagnosed?

Flatulence is not an illness and therefore not a ‘diagnosis’, but is rather a symptom of various feelings of discomfort. In combination with other symptoms it can – if it is not temporary – be a sign of serious illnesses.   A doctor should be consulted about severe or longer-lasting flatulence.

Every diagnosis begins with a thorough interview with a doctor (anamnesis) about the patient’s medical history.  The doctor will talk to you about several points.

After this interview, a physical examination takes place during which the doctor examines the rectum and palpates and listens to the abdomen. Additional diagnostic procedures may also be carried out.  This could include ultrasound examinations of the abdomen (sonography of the upper abdomen), X-rays, blood and stool tests (it is important to test for ‘occult' [i.e. not visible] blood in the stools).  Special tests to establish food intolerances may also help to explain the symptoms.

How can flatulence be treatend?

Depending on the cause of the flatulence, attempts will be made to treat the underlying condition or the trigger. As wind is annoying but usually harmless, ‘gentle’ measures should also be used to treat it. Artichoke leaves, fennel, peppermint oil, caraway seeds, aniseed, papayas and ginger – as teas or as herbal medicines – contain bitter substances which stimulate the digestive juices.

Natural intestinal bacteria – probiotic bacteria products – are recommended in medical guidelines for treatment of flatulence, which also frequently occurs among patients with irritable bowel syndrome. These probiotic gut bacteria not only eliminate the symptoms (such as flatulence) of irritable bowel syndrome, but also the causes, and restore the equilibrium in the bowels in three different respects.

Which tips are there for flatulence?

Tip 1: Make sure you have a regular daily schedule: getting up and going to bed, meals and sporting activities should take place at more or less the same time.  Every disturbance or interruption of the normal routine (e.g. shift work or long-distance journeys) can disrupt the digestive rhythm.

Tip 2: Have yourself tested for food intolerances. Tests for intolerances (e.g. lactose intolerance) can confirm a suspicion, but even if the result is negative this does not always rule out intolerance.

Tip 3: Remove heavy meals which create wind from your diet. This means that you need to keep a food diary and to find out which foods, drinks and situations have an influence on symptoms and cause complaints. Prevention is better than cure.  A large number of small portions are better than a few large ones! Eat slowly and chew well. Drink a sufficient amount of liquids (e.g. mineral water without carbon dioxide) Avoid greasy foods and those which create wind as well as very cold and very hot drinks.

Tip 4: Give up smoking if possible and only consume alcohol in moderation.

Tip 5: A bowel cleanse can help. Bentonite and humic acids have the ability to bind toxins and other deposits and can therefore also ‘neutralise’ and eliminate bowel gases. Psyllium husks and special probiotics or synbiotics regulate bowel movements, soothe and regenerate the intestinal lining and restore a healthy gut flora.

Tip 6: Taking probiotic multi-species synbiotics which protect the intestinal lining and balance digestive function is ideal as an (also long-term) preventive measure and to support treatment of flatulence and irritable bowel syndrome, among other things.

Tip 7: Support your liver. Alkaline foods and those with a bitter taste can prevent the increase in flatulence which occurs with weakness of the liver. The leaky gut which arises in the case of a weakened liver can be gently ‘sealed' again by means of natural bowel bacteria which not only combat the symptoms, but also eliminate the causes. The intestinal lining is regenerated and the intestinal barrier restored.

Tip 8: Manage your stress effectively. The bowels react to stress more sensitively than any other organ, and flatulence can arise as a result of overexcitement and stress.